From Fire in the Mind

Chapter 9. In Search of Complexity 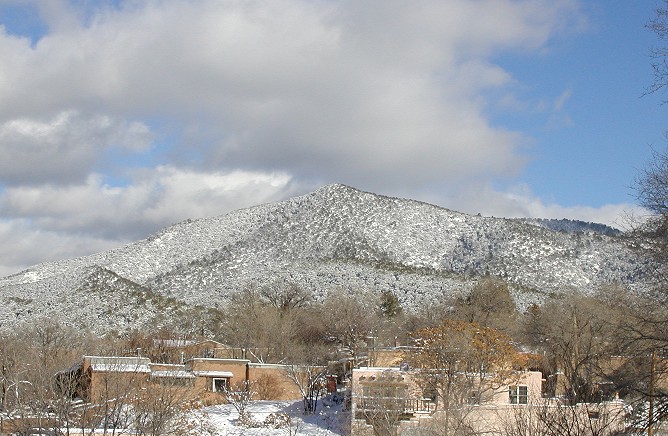 A short timelapse film of clouds and sun sweeping over Talaya Hill. Another view by Gustave Baumann.

From many parts of Santa Fe, the most prominent feature on the eastern horizon is a pinon-and-juniper-dotted foothill called Talaya. With its steep sloping sides and its narrow rounded top, Talaya hill looks so symmetrical and precisely carved that it sometimes seems less a happenstance of geological forces than the deliberate work of an intelligent hand. Whenever pattern, deliberate or accidental, leaps forth from an otherwise random field, the mind is jolted with a sense of recognition and a compulsion to explain. An economist who regularly visits the Santa Fe Institute says that the first time he saw Talaya he was struck by a feeling that it was a holy place -- a reminder that there are forces and meanings beyond human comprehension. He had recently begun exploring eastern religions and had come to believe in powers even more mysterious than Adam Smith's "invisible hand," with its ability to apportion goods and services according to the laws of supply and demand. Another visitor to Talaya, who perhaps had similar ideas, planted on its summit a stick wrapped with colored string, a spiritual antenna for some unknown religion, maybe one he invented himself.

It is unclear from the history books how Talaya got its name. To the south of it, toward St. John's College, is the higher but far less striking visage of Atalaya mountain, named after the Spanish word for watchtower. The mutation that changed "Atalaya" to "Talaya" was probably accidental, though Seth Lloyd, the Los Alamos physicist, once proposed that the progression be continued, so that the smaller rise in front of Talaya, which the locals call Apodaca, would be known instead as Alaya hill, and the one in front of that Laya hill, and so on until the supply of a's was exhausted.

While almost everyone who visits Santa Fe sees Talaya from the distance, punctuating the skyline, very few make it to the top. There is no well-established trail, so hikers have to improvise. Drive east on Canyon Road, which leads from the town plaza toward the mountains, following it to a dead end at the Randall Davies Audubon Center, a small wildlife preserve. There you can park and hike up one of the side canyons or ridges that leads in the direction of Talaya's top. The problem is that you cannot always see Talaya from this far below -- there are too many intervening hills -- and so it is easy to go astray, following a canyon for a mile or so to the top of a ridge only to find that you have missed the goal entirely, that Talaya rises tantalizing and unreachable behind you. Or you might slowly scale the side of what must surely be Talaya only to reach the crest and find that it is merely an unnamed foothill, with a deep canyon separating it from another hill beyond. Is it worth descending into the canyon and then climbing the next hill, hoping that it will put you in sight of Talaya? Or is it best to turn around and start over again? Who knows? The next hill might be even farther from the goal.

The attempt to reach the highest point of a landscape without a map and compass is similar to what mathematicians call hill-climbing, a method they use to explore imaginary mathematical terrains. An equation with two variables, x and y, can be graphed as a curvy line, with two-dimensional peaks and valleys. For each point on the line, the coordinates represent the values of the variables. For y = x, we get a straight diagonal line. For y = x2, a parabola. For y = sin(x) an undulating wave. A three-variable equation yields a surface -- the three-dimensional extrapolation of a curve -- which might look very much like a relief map of the foothills of Santa Fe. Each point on the landscape can be associated with different values of three variables, x, y, and z, giving longitude, latitude, and altitude. Equations with more variables cannot be directly visualized, but mathematicians think of them as describing multidimensional landscapes, with peaks and valleys in four, five, six, a hundred -- as many dimensions as you like. In a hill-climbing problem, one wants to find the combination of numbers that, when plugged into the equation, will generate the highest output, that will take you to the highest point (or points) on the landscape. The constant problem is fooling yourself into thinking you've reached the summit when, alas, you are stuck on a lower hill -- what is known in the trade as a local maximum.

Or, to change metaphors, think of an equation's variables as knobs on a black box that is hooked to a meter. Finding the maximum solution is equivalent to fiddling with the dials until you discover the combination of settings that causes the needle on the meter to rise to the highest point. With even a few knobs, the number of possible settings becomes astronomical and you might be left feeling as though you were trying to open a safe by trying every possible combination. Suppose you are attempting to find the maximum solution for a six-dimensional equation. As you hold five of the variables, u, v, w, x, and y, constant, you slowly increase z and watch the needle simultaneously climb higher. At some point you increase z one more increment and the needle begins to fall back the other way. You have reached some kind of maximum but is it a foothill or a summit? If you keep incrementing z will the solution eventually go higher again, crossing a valley and scaling another peak? And if it does, will you be on your way to the summit or wasting your time scaling another foothill? Perhaps you should be incrementing y instead of z, following a ridgeline along a different dimension, or readjusting u and v and starting the climb from an entirely different point on the landscape. It is as though you were blind and must feel your way to Talaya, sensing with your fingers if the slope is up or down. The simplest strategy in such a case is always to take a path that brings you higher than you were before. But more likely than not you will get stuck on a local maximum, separated by a chasm from a goal you cannot see.