What some call Talaya, others call Picacho Peak, which literally means "Peak Peak." The maps don't help much in sorting out the confusion. The 1961 revision of the USGS quad for Santa Fe carries the label "Talaya Hill" just to the west of the peak. In the 1977 revision, the label becomes "Talaya Hill Grant," which is carried over to the revision of 1993. On all three maps, the label is displaced to the left just enough to leave it unclear whether it refers to the 8,577-foot peak itself or to the lands further down. None of the maps, however, refers to anything called Picacho. Another source, "Map of the Mountains of Santa Fe" (Drake Mountain Maps, 1995) unambiguously calls it Talaya Hill (again with no mention of a Picacho), but I am told that the 2001 edition does call it Picacho. It's hard to know what to think.

Adding to the muddle, the name of an old water company site that rises above Camino San Acacio (where designer Tom Ford is building a house) appears on many maps as Talaya Hill Reservoir. And Sallie's Hill, which rises behind it (and is protected by a conservation easement put in place by its owner, Sallie Wagner) is also sometimes called Talaya Hill.

Some more data points: Gustave Baumann's 1924 woodcut is entitled "Talaya Peak," and it certainly resembles what people have been calling Picacho. Yet the 1965 edition of New Mexico Place Names, edited by T. M. Pearce, fuzzes things up even further: First it notes that "Talaya" and "Atalaya" (Spanish for "watchtower") are two names for the same land grant, petitioned for in 1735 by a Manuel Trujillo. But "Atalaya Peak" is described as "a small cone-shaped hill 1/2 mile E. of St. John's College" -- a much better description of Talaya than the neighboring Atalaya (9,121 feet), which looks nothing like a cone. Elsewhere in the book is a listing for "Mount Picacho" ("2 miles E. of Santa Fe") noting that "On its summit, in August 1937, the ashes of Mary Austin . . . were buried in a cairn of rocks." Did the writer mean Atalaya Mountain or Talaya/Picacho? No elevations are given so it is impossible to know.

I find it difficult to believe that so prominent a landmark on Santa Fe's horizon would be called simply Peak. So here's a theory: The whole mountain, rising from the foothills at Camino del Monte Sol, west of the old reservoir, up to the conical peak at 8,577 feet, and ending at the summit at 9,121 feet, was originally called Atalaya, later corrupted to "Talaya." When people wanted to refer specifically to the pointed portion (which is the most visually striking), they would call it El Picacho. The area between Camino San Acacio and Camino de Cruz Blanca was collectively called Talaya Hill.

I'd appreciate hearing from anyone with more information on this.

Here are a short timelapse film of clouds and sun sweeping over Talaya and an excerpt about the peak from my book Fire in the Mind.

Since writing this in 2007, I have come across a map of the boundaries of the Talaya Hill Grant, as claimed by its heirs in legal proceedings in the late 1800s. It shows "Sierra Talaya" as the grant's eastern boundary. 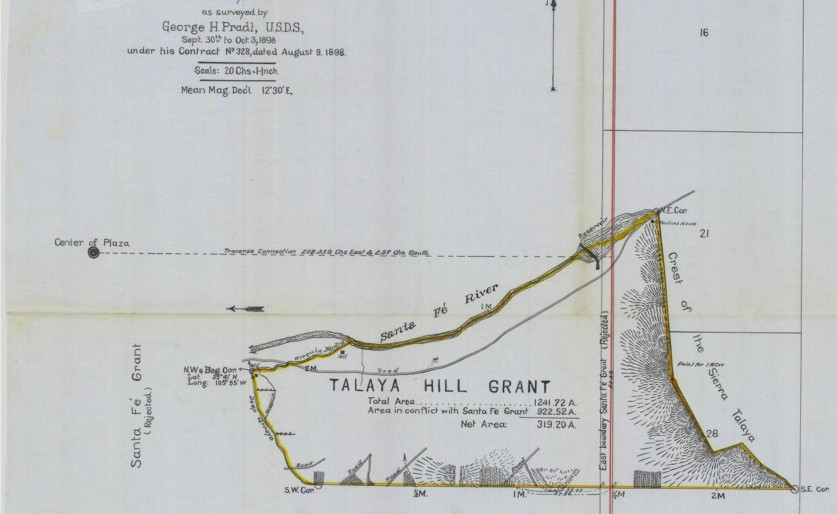